(in the estate of  the late James Arthur Soden, Toronto, Canada)

Grange,Co.Sligo  is , of course , the main townland with connections to the Sodens. It appears to me that these Sodens had some link ,

yet to be established , with the major families of Warwickshire , though not of that ilk. They took posts as soldiers/planters/colonists

in the Cromwellian forces.  Many families from Warwickshire and Oxfordshire  have been mentioned in connection with Sligo ,

e.g.  the Throckmortons ,the Temples ,Fiennes , amongst others.    Cromwell had only companies of men , that is , groups of men,

often families like the Cootes, (3 brothers and a cousin) , who formed their own companies with the incentive that whatever they gained

in plunder they kept either for themselves and gave in payment to their men.

I have found no evidence to support the claim in the UCD folklore archive that ?Soden? obtained his lands other than by official means.

I believe the answer to this to lie in the distribution of lands outlined by Dunlop in his work on ?Ireland under The Commonwealth.?

Lord Palmerston , the British Prime Minister , of the 19th century , was of the Temple family and there are many references to the

name Temple in the Grange/Moneygold area of Sligo, though some derive from the Gaelic timpeall/church.Palmerston was by all

accounts not the most popular landlord. This is evidenced by his treatment of Thomas Soden and other tenants in the 1790?s who

experienced difficulties with rent demands and  his handling of the famine situation on his estate.

The origins of the   Irish Sodens can be traced back to  Warwickshire,England in the small town of Bourton-on-Dunsmore and  these

came to Ireland as part of Cromwell's forces in 1649 or thereabouts. 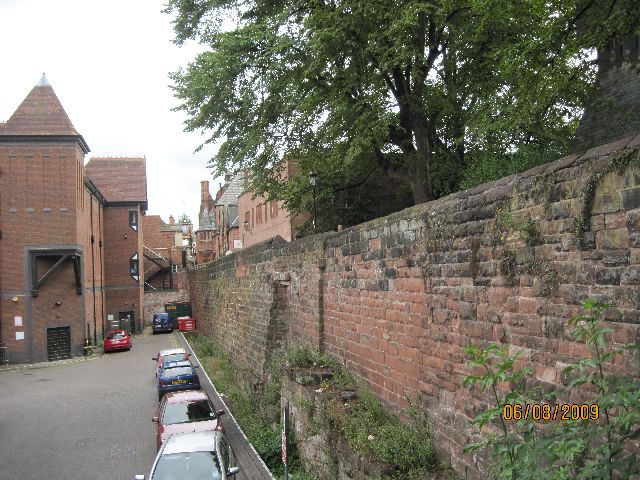 Although very little has been written about them , the Chester Refugees  were protestants who fled to Chester in 1689 at the

time of the Battle of the Boyne to avoid the Catholic forces at the time and later  returned with the advent of William of Orange.

As you can see THOMAS SODEN was 94 years of age and had a wife , CATHERINE and a child .

I do not know who this child could be but it may well have been the child of   THOMAS SODEN Jnr. recorded in the

Hearth Money Rolls of 166(5)5.  In the Betham abstracts in the GO,there is mention of THOMAS SODDEN and

his brother ROBERT , and his wife , KATHARINE.The fact that the 1689 will mentions John Pugh as the brother of Katharine

in Chester and his business as a shopkeeper. The Chester Guild documents have not yet been completely transcribed

but may well shed important new light on these two families.

his family were anti-royalist and with the Restoration of Charles II had to prove their loyalty. O'Rorke in his work on Sligo

the Cromwellian settlers. It is interesting to hear Established Church of Ireland  Protestants speaking with such bitterness

against these new settlers,although they as colonists had done the same thing prior to the Cromwellians. However ,

some with time felt entitled to rule the country more that these politically different upstarts.

The reference to Soden in Lewis is valuable .However , Lewis like many foreigners touching on Irish history neglects

precision for the story. This refers to a plaque still in Drumcliff Protestant church , which we encountered first as

children on our regular visits to Mullaghmore.The inscription is for a THOMAS SODEN!!! , who died in 1700 at 105 years,

and not JAMES as stated in Lewis. This plaque is still in the foyer of the church,though somewhat frayed. I believe

according to James Soden , Toronto that this plaque was erected by Major Eccles , who was married to Isabella Letitia Soden.

She was the daughter of James Nicholson Soden , and she was organist in the Ahamplish  church for years. She  has

done an embroidery of the Soden crest , which is now in Toronto , Canada. The existence of a cup/chalice  from

Stuart/Williamite period is also alluded to by the rector?s wife  of Drumcliff in the 1930s but its whereabouts is unknown.

1787 ? 1818 which he later donated to the Sligo Archives. He possesses a painting done by the son of

(The signature of Edward Macklin Eccles/Courtesy of James Arthur    Soden,Toronto,Canada)

From the year 1706 to the 1730's we see regular mention of the Soden as Sheriffs in Sligo. This job was an important

office at this time often bringing unpopularity on the bearer because of the nature of the duties.

In the year 1711 we come across HONORIA SODEN,who conformed to Protestantism from presumably Catholicism,

I gather,to keep ownership of her lands. This is the first record of Honora/Honoria/Nora in the family. This means

the Soden name is associated with Catholicism at an early stage some member having obviously married a local ,

she being of the Conyngham family .Certainly the Sodens of Drumrat and Templevanny have been Catholic since at least the 1820's.

To us, of course, today the notion of religion means very little, but then it was a license to live in peace as the Penal Laws

were harsher even than Apartheid for those Catholics convicted under them.

This fact taken from the Convert Rolls to the Established Protestant Church has always interested me .This mixed marriage

could entail total loss of property and may well be a reason for the conforming of HONORIA SODEN. With this Honora

Towards the end of the 18th century the Sodens decrease in number in Sligo,I believe,mainly because of the prevailing

laws on marriage settlement at the time,where large tracts of land were forfeited away as dowries,intermarriage with

Catholics and ,thus,loss of or decrease in size of property meaning movement to other counties such as Leitrim,Longford,

Meath, Cavan and Dublin.Due to the loss of Parish Records and Census  precise information on developments within the

families is hard to extrapolate.

The 2 daughters, Elizabeth and Catherine,  of James Soden and Jane Wynne eventually ceded their lands into the names

of their respective husbands Kendrick Manley and Cairncross Cullen. The Cullen properties were finally sold under the

Encumbered Estate Acts of 1852.  Before their father , James , died  when they were just 3 and 4 years of age , he tried

with  great determination to hold possession of these properties for his two infant daughters. Eventually the prevailing

right of husbands to control all property interests at this time triumphed.

till the mid-19th century,and so held such offices as provost of the town and sheriff. There is recorded by Wood-Martin

of James Soden being a member of the Sligo Free Masons in the year 1792 , as shown by the Masonic records in Dublin.

Indeed a John Henry Soden founded   the Mohill Lodge of the Free Masons in 1865 , being previously associated with the

extant from the Soden  families of this time in the form of letters,bibles, it can be well ascertained from deeds ,wills ,marriage

Establishment families ,of course,Protestant ,in the Sligo area and in the Northwest at this time  in general. The names of Vernon,Wynne,Follyot,Gillmore, Hamilton, Hillas,McGowan and many others occur with great frequency.

The Sligo Sodens were staunchly Protestant and British in contrast to the majority of the population in the Sligo area .This is

evident by the full-hearted participation  of Thomas Soden and his brother , Clotworthy Soden,Rector of Maghera , in opposition

to the 1798 Insurrection in the northwest as evidenced by the material in the Rebellion Papers cited for the period . The naming

of Thomas Soden  in the Private Diary at Wexford Museum is in fact incorrect as the Soden involved was Capt. Mossom Soden

from the Somerset Regiment , who had been in Ireland recruiting  since 1794 . It is from these Sligo families that we eventually

see some members take up residence in the neighbouring counties of Donegal and Derry to the north,and Leitim and Longford

to the southeast .The towns of Mohill , Ballinamore , Ballinalee , Edgeworthstown , Athlone  were among the Soden residences

from the beginning of the 19th century.

Another member of some interest is CLOTWORTHY SODEN , son of  JAMES SODEN and ANNE McGOWAN , Trinity scholar and

former Archdeacon of Derry.   Clotworthy was born in Glasslough,Co.Monaghan.  I had hoped he or his family would be recorded

in the Leslie estate but alas not. The Leslie family  was associated with Winston Churchill , and where Churchill stayed in his

youth . Clotworthy is striking by his name , which is of a planter family from Yorkshire , I believe , a name associated with the

many years later. Could this Edward Torrens be a descendant of George Torrens recorded as the co-church warden with

EDMUND SODEN in 1777? This EDMUND SODEN is also mentioned in Cotton's Church of Ireland Fasti.  I have often wondered

if this partnership led to bad blood between the two men at some stage resulting in this dislike.  The direct descendant of

the British officer responsible for the winding - up of the Ashanti connection between Britain and France in 1903.

There are a number of disparate branches in North America coming from Ireland , Britain
and Germany.We know that the Canadian and some branches in New Jersey, New York , Oregon
nd Kansas have their origins in Ireland. They come from Carrick-on-Shannon, Cavan,Leitrim
and Sligo.

The Thomas Soden of Cambridge , Massachussetts , may well be  of English origin , after
whom a street has been named in that town. Indeed  another street in Oregon  city ,
Wisconsin   is named after William Soden , whose life is recounted in the ?Times to
Remember? by Wayne Salisbury .

The Nebraska Sodens originate in Hook Norton , Oxfordshire , England , heading initially
to New York , then to Nebraska where they still are. At least one branch is Afro-American ,

and we  know , too , the Cincinnati  Soden families have  immediate  German connections .

The participation of  William and Edward Elijah Soden in the breaking of the British
blockade was one of the most interesting facts uncovered ,showing the early Sodens were
with the American?rebels? at the earliest stage. The origin of the two brothers has yet to
be ascertained.

I hope you will take some joy and pride in the history of your  name . This is based on
historical fact with the deliberate aim of avoiding myth or legend attached to the name
which I believe unwisely distort the serious nature of the project . I hope that to
whatever branch of the family you may belong you derive as much enjoyment and interest out
of your researches as I have done. I look forward to learning even more of the outcome ,
deeds and achievements of all members of the Soden familyand their relatives  .

Notes on the Historical , Etymological and Phonetic Origin of the Name
ORIGIN OF THE IRISH NAME

This family,of which I have found no trace prior to the transactions under the Acts of
Settlement and Explanation,has since multiplied considerably.

Thomas Soden thus obtained the lands of Lislakely in Co.Sligo at that time and immediately
afterwards acquired the nearby Grange property from the grantee Thomas Park. Soden of
Grange appears as a "titulado"in the 1659 - 60 "census" and James Soden of Grange was one
of the Protestant gentlemen attainted under James II. Testamentary records fro Co.Sligo
from 1699 show tha persons of the name were extensive property owners in Co.Sligo up to
the middle of the 18th century,after which they seem to have become less prosperous though
more numerous.  By 1864,when general registration of births came into force,they were
still found in Co.Sligo but were mainly located in or near Co.Cavan. In some places
e.g. Kells,the name has been curiously equated with Saurin* which is a Huguenot name,
originally Norman de Sauvergne. Reaney and Weekley agree that Soden is derived from Soudan,
a corruption of Sultan,and is thus a surname of the nickname class.

REANEY , THE ORIGIN OF ENGLISH SURNAMES
'Soden' according to Reaney :

OFr Soudan 'Sultan' occassionally perhaps a nickname ,but often a pageant-name from the
Soldan of the Saracens.

ETYMOLOGY OF THE NAME 'SODEN' IN GERMANY
The following is a very brief summary of the etymological & phonetic   development of the
name 'Soden' according to German sources.