END OF THE ONTARIO CENSUS 1871 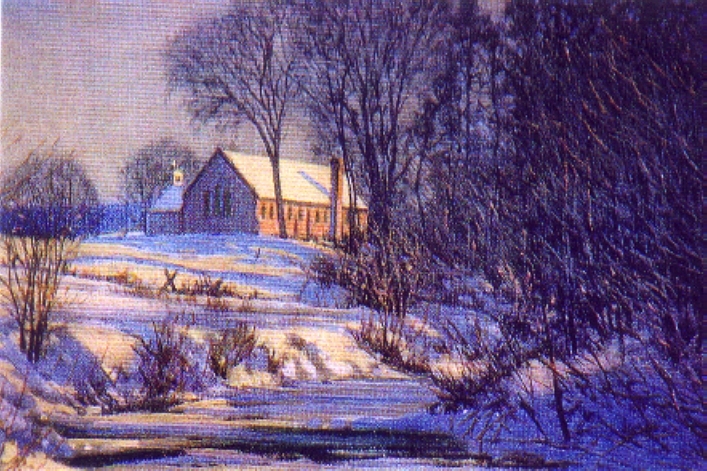 (Painting of the Episcopalian Church in Wyebridge,Ontario

by Franz Johnston of 'The Group of Seven'. Doris Soden of

Wyebridge was his pupil.)

near Mohill (Republic of Ireland), son of George Drumm and ELIZABETH MORRIS SODEN;

married  18.April,1894 May Isobel Harvey in Savanna la Mar,Jamaica,and they had three sons

Leitrim. He attended school in Tawley,where his parents had stayed

shortly after his birth. Sometime in 1863-64 the family returned

briefly to Mohill. According to May Isobel Drumond,after George Drumm

Leitrim over ?the Landlord system?,he had a ?paralytic stroke from

which he never really recovered.? Disgusted with conditions in

Ireland and worried about the family?s future,he and his wife decided

to emigrate with their children to Lower Canada;they arrived in

In order to survive,Mrs.Drumm opened a store in the front room of

their house,the boys all sold newspapers and ,when he was 14,William

name,?he officially changed his surname and that of his mother and

William Henry Drummond graduated with an M.D. from mcGill University in 1884

and started practising in the eastern townships

(along the St. Lawrence River) to which his dialect poems so often refer.

well after his marriage May Isobel that Drummond   published his first book of poetry,

loved poets of his nation . he ws made Fello of the Royal Society of Canada in 1899

and received two honorary degrees ,the first from the University of Toronto in 1902,

Poet in Patois  by J.B.Lyons.

You can pass on de worl'w'ever you lak,

Tak' car on de State,an'den you come back,

Ma frien' dat's a fack,I know you will say,

Excerpted from the Toronto University Selection of Drummond?s Poetry.

11 years in the province

Father of the deceased registered as Frank C.Tye.

1941,6th September enlisted in Montreal. His home was in Westmount,Quebec

and he later he was a squadron leader in No.8 OUT

This officer has been employed as Squadron Adjutant for over two years in an isolated base.

During all this time and especially during a period of conversation in the squadron,he has shown

outstanding  ability in organization and administration. In achieving this,he has cheerfully worked

many long hours for above the normal call of duty. To all members of the squadron he has been

a constant source of inspiration.

James Arthur Soden with his late wife, Edna, and his two daughters, Lesley and Ann, May 2005 at the Investiture of  The Order of Canada.

(Uncle of the three British Sodens from Wincombe,Oxfordshire killed in World War 2)

He may have been raised in England as his father

was in the UK during the war.

[ A bold and distinguished officer who has accounted for three enemy aeroplanes and two balloons during recent operations. ]

Burma and Ian Scovil SodenDSO.   All three nephews lost their lives in World War Two. A monument has been erected in their

village to these brothers and their fallen compatriots in Wincombe,Oxfordshire .)

This webpage is copyrighted. © 2023 Felix Soden. All rights reserved.